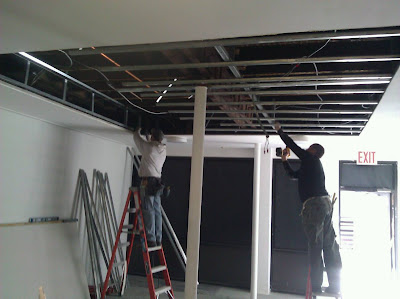 Published with Blogger-droid v1.6.6
The really painful part is it looked pretty much just like when I walked in and for the next two and a half days.
Which ate all my install time, and I had to throw he wiring into the ceiling at the last minute, with minimal testing.
And then they gave me no access panel as we discussed, so when I came in the next day and 4 pieces were not working just a few hours before opening ... well they just didn't get to work.
In addition the piece really needed at least a day to sit, as it turned out the WiFi was a little flaky. (isn't it always) and the dropouts caused lockups on my playback computers.  I coded in checks and fixes but not until 2 days after opening when I had a chance to find out what was going on.
Now if I was on Ethernet as promised that would not have happened, or if  I was able to install on Monday it would have been discovered and fixed by opening.


Anyway expect a more positive blog about the piece when I get a chance to take a photo of the fully working install.
Posted by haleagar